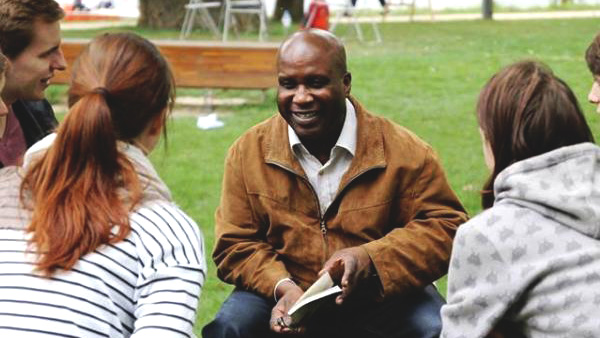 The Human Library is one of the most interesting activities of the educational department of Amnesty International in the Czech Republic. Instead of books, people can "borrow" a person with an interesting life story with whom they would never talk in real life and ask them everything they are interested in.

The living books are “read” at elementary and high schools since 2013. Amnesty International organizes public Living library only occasionally. This year’s Living Library at Prague Pride is held in cooperation with the Konsent organization, introducing the topic of sexual violence and harassment. Since 2016, Konsent has been joining the public space with educational campaigns and dispels myths related to the theme in an entertaining way.

How the Living Library came into existence

Human libraries were born in the minds of members of the Stop the Violence movement from Denmark (founded in 1993 by a group of friends in response to the stabbing of one of them). It was first performed during the Roskilde Music Festival in 2000. The experience was very positive and reached the Youth Directorate of the Council of Europe in Budapest, which supported its implementation at the Sziget Festival in 2001.

Since then, the method has spread around the world, has been partially modified in different countries and organizations, but the idea remains the same - get your slogan "Don't judge a book by its cover" and allow people to have a personal conversation with representatives of groups they would not otherwise meet or talk to.

Education for professionals in helping professions

Membership in councils and committees

Registration in the Register of Association: Municipal Court in Prague, Section L, Insert No. 22311

We use cookies on this website to ensure its full functionality, analyze traffic and, where appropriate, tailor content and advertising to specific users. We process all such information in accordance with the Privacy statement.